Sweet October for Markets
Markets rebounded from September’s pullback with strong results in October, driven by improving economic conditions and a better-than-expected start to earnings season. The Dow Jones Industrial Average gained 5.93 percent during the month, while the S&P 500 saw a 7.01 percent gain. The Nasdaq Composite led the way with a strong 7.29 percent return. These positive results helped all three indices to record highs in October.

Equities were supported by improved earnings growth during the month. As of October 29, with 55 percent of companies having reported actual earnings, the third-quarter earnings growth rate for the S&P 500 was 37.5 percent, according to Bloomberg Intelligence. At the start of earnings season, analysts had estimated a more modest 28.4 percent increase. That’s an encouraging sign for markets because improving fundamentals support long-term market performance.

Equity markets also saw solid technical support throughout the month. All three major indices remained well above their 200-day moving averages. The 200-day moving average is an important technical trend line, as prolonged breaks above or below can signal a shift in investor sentiment. This marks 16 consecutive months with all three indices finishing above trend, which is an encouraging signal that investors remain confident in the ongoing economic recovery.

International markets also saw positive results in October; however, the returns were muted compared with U.S. markets. The MSCI EAFE Index gained a solid 2.46 percent during the month. The MSCI Emerging Markets Index experienced late-month volatility yet managed to record a 1 percent return. Technical factors for international markets were mixed. The MSCI EAFE Index was well supported and spent the month well above its 200-day moving average; however, the MSCI Emerging Markets Index finished below trend.

Fixed income markets experienced turbulence. The Bloomberg U.S. Aggregate Bond Index declined 0.03 percent in October, driven by a modest increase in long-term interest rates. The 10-year Treasury yield increased from 1.48 percent at the start of the month to 1.55 percent at month-end. The Bloomberg U.S. Corporate High Yield Index recorded a 0.17 percent loss during the month despite a modest tightening of high-yield credit spreads.

Medical Risks Recede
We saw continued improvement on the medical front for the second month in a row. The average number of daily new COVID-19 cases declined throughout the month, finishing at the lowest level since late July. We also saw similar improvements in the number of hospitalizations and deaths.

The improving public health picture was driven by increased vaccination levels throughout the country. We ended the month with more than 57 percent of the population fully vaccinated against COVID-19 and 8.6 percent partially vaccinated. Combined with the natural immunity from people who have contracted the virus, these solid vaccination figures played a key role in limiting the spread of the most recent wave of infections. In addition, the recent preliminary approval for vaccinations for children ages 5–11 should serve as a catalyst for further vaccination adoption in the months ahead.

Although another wave of infections is possible as we head into winter, the worst of the recent medical risks are likely behind us as we continue to see improvements on the public health front.

Economy Continues to Grow
Economic reports released during the month painted a picture of continued economic growth, though the pace of growth was slower than earlier in the year. We saw consumer confidence stabilize, as the Conference Board Consumer Confidence Index recorded a surprise gain for the first time since June. Although consumers remained concerned about inflation, declining medical risks helped support confidence. Consumers continued to spend, with September retail sales and personal spending reports showing ongoing consumer spending growth. 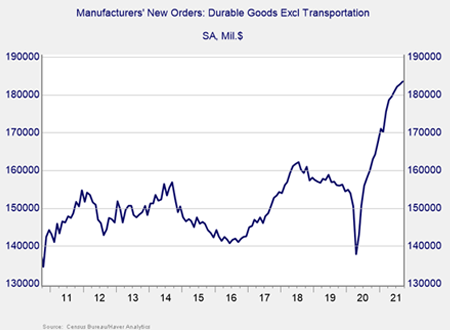 Businesses have invested in new equipment and workers throughout the year to meet high levels of pent-up consumer demand. This increased spending has been a tailwind for the economic recovery, signaling high levels of confidence from business owners that the current economic expansion is here to stay.

One area that’s shown notable improvement throughout the pandemic is housing. Home builder confidence rebounded swiftly after initial lockdowns ended last year and remains in healthy expansionary territory. It reached a three-month high in October and sits well above pre-pandemic levels. This has supported a surge in new home construction this year, which is a welcome development in a market that has a lack of existing homes for sale. Although supply chain disruptions and labor shortages have challenged home builders this year, the still-high levels of confidence and new home construction are a positive signal that the housing sector has been able to weather these headwinds.

Home builder confidence has been supported by high levels of prospective homebuyer demand. The pace of existing home sales has increased notably during the pandemic, as low mortgage rates and shifting preference for more space have led to a surge in sales growth. Existing home sales increased 7 percent in September and reached their highest level since January. This strong pace of sales growth, despite a relatively low supply of existing homes for sale, indicates buyer demand remains strong, which should support continued growth for the housing sector in the months ahead.

Despite Progress, Risks Remain
Although the economy continued to show signs of healthy growth during the month, real risks to the ongoing recovery remain and should be monitored. We face ongoing political uncertainty from Washington, as Congress and the current administration continue to negotiate over a large infrastructure spending bill. Although a deal could happen relatively soon, the continued uncertainty has the potential to weigh on sentiment and markets. In addition, while Congress was able to avoid a government shutdown and debt ceiling-related default in October, we may face a similar situation in December unless another agreement to raise or suspend the debt ceiling is reached.

We may also face uncertainty from the Federal Reserve (Fed), which is widely expected to announce plans to taper asset purchases at its November meeting. The Fed has purchased $120 billion per month in Treasury and mortgage-backed securities throughout the pandemic, but it is expected to start gradually removing this supportive policy in the months ahead. Although the tightening of monetary policy is widely anticipated, any surprises regarding the pace or timing of tapering could cause market volatility and should be closely monitored.

International risks remain as well, as seen by continued concerns surrounding the slowdown in China and the country’s troubled property development sector. Although these concerns aren’t expected to derail the global economic recovery, their potential to negatively affect markets should be noted.

Ultimately, the economy continued to show signs of solid growth in October, and the most likely path forward remains continued growth in the months ahead. Although very real risks remain for the economy and markets, the worst of the medical risks appear to be behind us. Looking ahead, market turbulence is possible as we finish the year, so a well-diversified portfolio that matches investor goals and timelines remains the best path forward for most. As always, if you have concerns, you should reach out to your financial advisor to discuss your financial plan.

All information according to Bloomberg, unless stated otherwise.

Disclosure: Certain sections of this commentary contain forward-looking statements based on our reasonable expectations, estimates, projections, and assumptions. Forward-looking statements are not guarantees of future performance and involve certain risks and uncertainties, which are difficult to predict. Past performance is not indicative of future results. Diversification does not assure a profit or protect against loss in declining markets. All indices are unmanaged and investors cannot invest directly into an index. The Dow Jones Industrial Average is a price-weighted average of 30 actively traded blue-chip stocks. The S&P 500 Index is a broad-based measurement of changes in stock market conditions based on the average performance of 500 widely held common stocks. The Nasdaq Composite Index measures the performance of all issues listed in the Nasdaq Stock Market, except for rights, warrants, units, and convertible debentures. The MSCI EAFE Index is a float-adjusted market capitalization index designed to measure developed market equity performance, excluding the U.S. and Canada. The MSCI Emerging Markets Index is a market capitalization-weighted index composed of companies representative of the market structure of 26 emerging market countries in Europe, Latin America, and the Pacific Basin. It excludes closed markets and those shares in otherwise free markets that are not purchasable by foreigners. The Bloomberg Aggregate Bond Index is an unmanaged market value-weighted index representing securities that are SEC-registered, taxable, and dollar-denominated. It covers the U.S. investment-grade fixed-rate bond market, with index components for a combination of the Bloomberg government and corporate securities, mortgage-backed pass-through securities, and asset-backed securities. The Bloomberg U.S. Corporate High Yield Index covers the USD-denominated, non-investment-grade, fixed-rate, taxable corporate bond market. Securities are classified as high-yield if the middle rating of Moody’s, Fitch, and S&P is Ba1/BB+/BB+ or below.